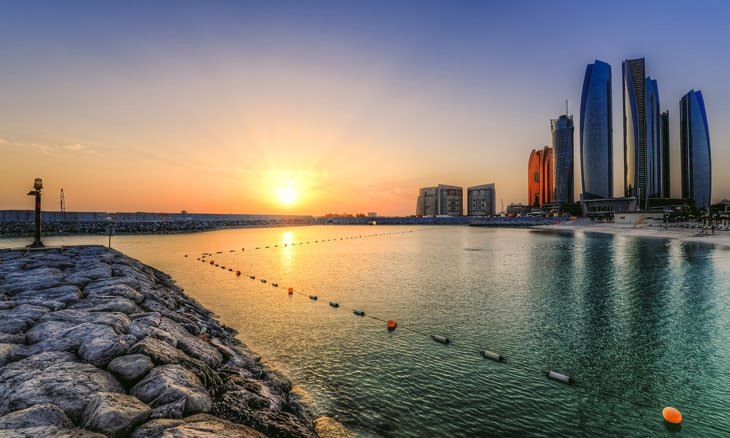 Some Interesting Facts about Abu Dhabi

Abu Dhabi is the capital and the largest of the seven Emirates. Its naturally desert climate and its convenient location in the Arabian Gulf has endowed it with warm seas and cosy beaches. Its long coastline – the shallow waters of the Southern Gulf, extending from the base of the Qatar Peninsula in the west to the border of the Emirate of Dubai on the North East, was once the world’s best waters for pearling. Then, oil discovery in the offshore oilfields of the Southern Gulf revived the economy of Abu Dhabi.

Now Abu Dhabi is one of the most modern and richest cities in the world. The architecture of its modern buildings and sky scrapers is the finest in the Middle East. Abu Dhabi is one of the safest tourist destinations worldwide. Abu Dhabi city provides to tourist large gardens and parks, green boulevards lining all the streets and roads, sophisticated high rise buildings, state of art communication services and transport, the presence of all international luxury hotel chains, rich
shopping malls and cultural centers.

On the land, Abu Dhabi stretches South to the Oasis of Liwa where some of the world’s largest sand dunes can be found and East to the ancient Oasis of Al Ain.

This modern city where you can experience an unlimited sun, sand, sports and shopping has a whole range of exciting activities as it seems like an endless paradise of fun. Activities range from shopping in Mall where there are shopping festivals in March of each year to shopping in the upmarket shops to haggling in the souk market bargaining for best prices of gold, travelling in an air conditioned limousine to riding a camel in the desert, dining in five star luxury to sampling
Bedouin hospitality under the night sky to skiing in the sand dunes. Whatever choice you make, it will surely be an experience of a life time.

Arab is their native language and English is the most common language used.

The local currency is the UAE Dirhams, with a steady exchange rate of 1 $US = 3.671 Dh. UAE Dirhams
All major credit cards are accepted in most establishments, including hotels, restaurants and shops.

Expats enjoy the flair of a modern metropolis with almost 5000 years of tradition. From being the “Father of Gazelles” (the literal meaning of Abu Dhabi) to becoming a home for 900,000 people of different nationalities, this emirate has undergone a great transformation, which also becomes apparent in the vast variety of life in Abu Dhabi. Outside of Abu Dhabi City, this emirate impresses visitors and expats alike with beautiful sand dunes and a desert landscape interspersed by various oases, such as the garden city of Al Ain. Living in Abu Dhabi’s second largest city, expats can enjoy parks, palm trees, and the famous nearby Hajar Mountains.

Life in Abu Dhabi is very much influenced by Islam. Mosques can be found in almost every district of the city as well as in every corner of the emirate. The biggest and most sumptuous mosque in the UAE, the Sheikh Zayed Mosque, is also located here. It is not only a popular tourist attraction, but offers space for 40,000 worshippers in Abu Dhabi.

Tourism, in addition to the country’s massive oil reserves, is increasingly becoming a new source of income for expats and Emiratis. Almost everybody’s life in Abu Dhabi is affected by developments in the tourist sector, such as Saadiyat Island or Al Gurm Resort.

In addition to the modern tourist spots and shopping centers, there are traditional souqs offering spices, clothing, jewelry and other goods to expats and nationals. The busiest bazaar, which every expat should visit at least once, is the Grand Souq on Sheikh Hamdan Street.

Living in Abu Dhabi may not be as relaxed as the life many expats are probably used to. Although it is a modern and cosmopolitan city, the rules of a conservative society are prevalent, affecting everybody’s social life in Abu Dhabi.

Smoking, for instance, is prohibited in public areas. Expats have to find designated smoking rooms if they can no longer resist the urge to light a cigarette. The Ministry of Health plans to implement even stricter laws in the future to confront the problem of the increasing number of (mostly underage) smokers in Abu Dhabi.

Visitors and expats should make sure to avoid improper and revealing clothing. While bathing suits and shorts are acceptable at the beach, you should choose light clothing with longer sleeves and trousers’ legs for most other occasions.