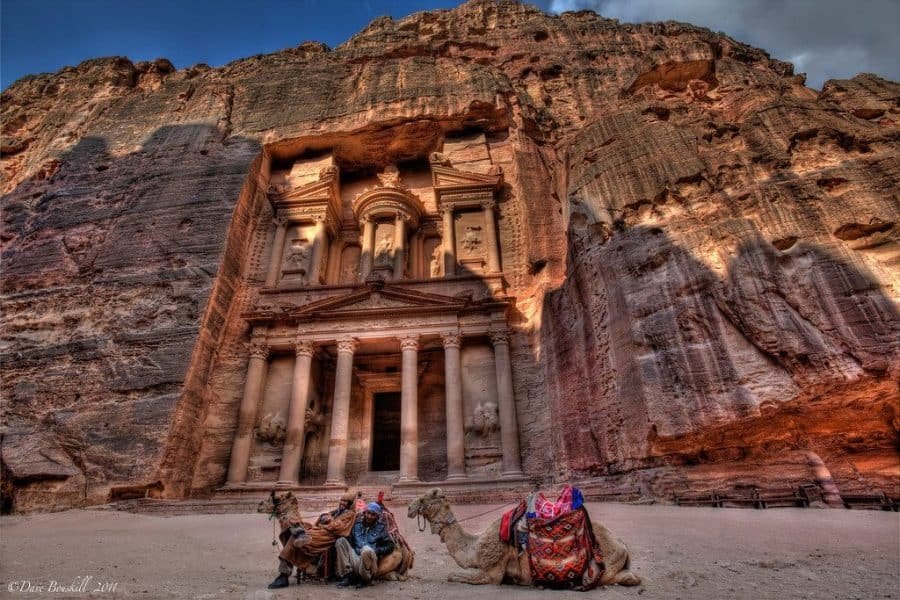 5 Most Interesting Facts about Jordan

1. The country has a rich tradition of pampering.

The Dead Sea isn’t just 20 times saltier than seawater — it’s practically a natural spa. Grab a handful of the mud that lines its banks, smear it on your body, wade into the intense blue water, and once you’re done bobbing around the surface feeling as light as an astronaut, wash off the dry oil brine and you’ll find you’ve got way softer skin. All those minerals in the water are said to help with joint pain and skin irritations, too. And you might find yourself feeling veryrelaxed here, as bromine, a natural sedative, evaporates from the lake.

2. You don’t know what hummus is until you’ve had it here.

Head to Hashim, an open-air falafel joint in Amman’s historic downtown, for hummus as far away from the strip-lit supermarket stuff as it gets. Doused in olive oil, lemon, and spicy pepper, it’d be a crime to put a carrot stick or potato chip anywhere near it. This is hummus that demands proper sides: fresh pita, hot pepper sauce, raw onion wedges, fuul(spicy fava bean stew), tomatoes, and perfectly shaped falafel made to order and served piping hot. This is hummus that breaks the act of eating down to its basics: No small talk, just dip, devour, groan with delight. Repeat, stand up, get out.

3. There are ancient archaeological sites in the middle of the capital.

The ancient Citadel of Amman (Jabal al-Qal’a) towers over the busy downtown area. At the foot of the hill on which the citadel sits is a restored Roman amphitheatre where open-air concerts and plays are held throughout the summer. The Temple of Hercules, a Roman religious site replete with giant marble fingers believed to be the remains of a statue of Hercules, lies near the top of the hill — visit just before sunset to watch the sun sink behind the hills of Amman while church bells ring and the call to prayer rings out from the minarets below.

4. There’s nothing quite like seeing Petra lit by candles, moon, and stars.

The ancient capital of the Nabataean kingdom, Petra was once a crossroads for camel caravans traversing the Silk Road trading spices and perfumes; today you can still see the vast and intricately carved sandstone temples, tombs, and palaces of the 2,000-year-old city.

Join the “Petra by Night” walk and follow the pitch-black canyon trail guided only by the light of candles placed every few meters. Cell phones and talking are banned, and the atmosphere is pure magic as the crowd reaches the iconic Treasury where more candles flicker against the facade — a local musician plays the pipe, sweet tea is served, and a Bedouin guide regales the crowd with stories.

5. There’s a 15th-century mountaintop village that looks like this

That’d be Dana. It’s part of a biosphere reserve of the same name that’s home to hiking trails, Feynan Ecolodge, 180 species of birds, 45 species of mammals (including ibex, gazelles, and wolves), and hillsides covered in 600 different kinds of plants. Look out for the rare wildflowers that bloom here every spring.